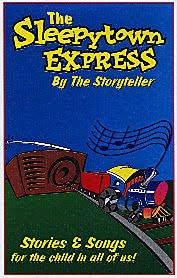 The story of The Sleepytown Express a vintage radio show broadcast over CFCY, is best told by The Storyteller herself - the late Betty Rogers Large. Her award winning book, Out of Thin Air is now available in pdf form as part of the Island Lives Collection at UPEI Robertson Library. The book also tells the larger story of broadcasting on Prince Edward Island which began with Betty's father, Keith Sinclair Rogers a boy with an enthusiasm for wireless communications. 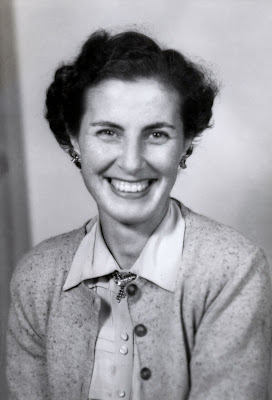 Original recordings of Betty's show were saved and rerecorded by her husband, the late Bob Large, and are now available. Some - broadcast near Christmas - featured a direct voice link to Santa Clause at the North Pole reading letters mailed from listeners, showing the amazing power of radio to track down even the most remote characters and create vivid memories for young listeners. To young people amazed that a box made up of tubes and wires could receive messages from around the globe, these radio communications from the North Pole helped fuel their imaginations further.

Bob selected several Christmas broadcasts to include in these recordings. Each are 30 minute compilations in WMA format which should play directly on your computer.

How The Glitter Began
Why The Chimes Rang
Peter Rabbit (Broadcast Feb 26,1947)
The Little Red Hen (Broadcast Feb 28,1947)
The Animal Store
Sleepy Town Express Theme
Thanks to the foresight of both Bob and Betty Large these materials were saved. We hope you enjoy this sample of vintage Maritime radio broadcasting.

Words and Music by Haven Gillespie

Storyteller Betty Rogers Large began broadcasting the Sleepy Town Express in 1925 over CFCY radio, a station that was founded and operated by her father, Keith Sinclair Rogers in Charlottetown Prince Edward Island. Her broadcasting career started at the age of 14 and would continue for 60 years. In retirement she returned to her roots in storytelling with her writing being broadcast over BBC and several revivals at Christmas time of the Story Town Express over local radio stations on PEI.

Broadcasts of the show sparked a demand for copies of the original shows which had survived as transcriptions on soft acetate discs and had been stored in less than ideal conditions for 50 years. Re-recorded onto tape using modern facilities the stories and music recaptures a time when radio was magic. The result of three years work the tape makes available vintage radio and preserves Island history. Out of Thin Air authored by Betty Rogers Large recorded in words and pictures the history of radio on PEI, the tape through voice and music is a fitting companion. In a similar way that Betty and Bob Large had been life companions as husband and wife as well as working partners the production of this tape by Bob Large is a fitting memorial to Betty, known to many Maritimers as “The Storyteller”.

Active in local theatre productions Betty brought her own creativity to her radio productions recruiting local actors or training children as needed. Some of the voices on this tape are the Storyteller herself, announcer Bill Brown, Mary Trainor as the Bubble Fairy, Austin Trainor as Santa, and George Scantlebury as Mickey.

Betty's sister Marianne (Rogers) Morrow, also fulfilled the role of storyteller on the show. During a period in the 1930's when Betty and Bob lived in Sackville, NB, Marianne kept the show going until Betty returned to the role again.

- Note in 2016. CBC Radio conducted an excellent interview with Betty's daughter Kathy Large, herself a retired CBC broadcaster, about Betty's Sleepy Town Express broadcasts. The news article remains on the CBC site and a recording of the interview is accessible on Soundcloud.
Posted by Ian Scott at 7:52 AM

Wow , what great memories for kids from the fourties. My wife (Laura Collins) was born in Montague in 1940 & listened to this radio program for many years. About 30years ago we were visiting Jean Reinhart in Harbour Grace Nfld when an elderly lady came into the store & asked if we were driving the car with PEI plates. She said her husband would like to talk to us. Laura wasn't long figuring out he was her PEI Santa Clause from years ago. We had a great visit with Mr. Trainor & even knew of some of his relatives on PEI.
Thanks for the great memories at this Christmas Season,
Ernie & Laura Davis

Thanks Ernie - what a great story. Thanks for sharing.