The Streets of Charlottetown - Dizzy Block


by Ian Scott as published in Voice For Island Seniors - Sept, 2012
Edited in February 2016 to reflect the return of the name Great George St. 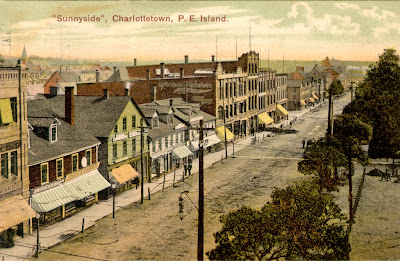 Dizzy Block remains a well known name for the block of Kent, Great George, Grafton and Queen dating back at least to the early 1930's when it was a destination for young people to walk and meet. Walking arm in arm was popular and like skating rinks, where getting a girl’s arm for a few rounds was the goal of the bolder boys, walkers on Dizzy Block also enjoyed the playful sport. As one spry 97 year old recently recalled, “What was the point of going if you couldn’t get a girl by the arm. You would start at the monument [cenotaph] and head up Grafton to the corner and then up Queen to Kent, back down and around on Great George to the monument again.”

Some mothers considered the area too wild for their daughters and kept them restricted, at home with comments about, “those wild girls that walked around Dizzy Block.” For many young people meeting up with friends before heading off to a restaurant, a dance, or movie, Dizzy Block functioned as a social coordination service long before mobile Facebook updates or texting were available.

The activity on Dizzy Block gained an international aspect when the Commonwealth Air Training Plan of WW II placed more young people - mostly young men - within close range of an admiring local female audience. Charlottetown citizens were quick to invite these young strangers wandering the streets home for a meal and visit, and thus many family friendships began. Courtship in most cultures requires an opportunity to meet and in a time honoured tradition young people headed uptown or downtown, as the case might be, to congregate in the heart of the city where servicemen "from away" mingled freely with local residents. Some like Sid Clay, a British airman met his wife Min in Charlottetown in the 1940's and compiled a list of 42 of his British contemporaries who also, met their brides while training here and returned  after the war to settle. He described how five to a car the boys piled into vehicles from Ed’s Taxi and for a quarter a piece were delivered downtown. There were other places that people might congregate but Dizzy Block was clearly part of the social scene where friendships began and romances blossomed for Island couples as well as service personnel. Yet the dizzy term was not derived from the prospect of finding romance there.

The limited number of recreational facilities, movie theatres, dance halls and restaurants meant there were only a small number of facilities to accommodate the increased numbers of young people looking for a chance to chat and make new friends and thus the sidewalks tended to be the place where they gathered, especially on weekend evenings to find out what was happening in town, and simply to walk around - and around again - at the place which was already known as Dizzy Block. It was a cute term that was easily learned by the new servicemen, as they headed into town.

As motor vehicles became a bigger part of teenage life, the block became a destination for young drivers entrusted with their parents’ car in the evenings, and by the early 1960's the area was less about walking and more associated with the dizzying aspect of driving around the same block daytime or night. We now associate the dizzy part of Dizzy Block with circling the block by vehicle in repeated attempts to find an elusive parking spot near the business we wish to visit, yet the term was derived from those young walkers that frequented the block on these evenings many years ago.

In recent decades with creation of Confederation Court Mall, the entire block has seen major recapitalization and heritage preservation, to remain the centre of downtown commerce. It was part of the gradual move of businesses up from the waterfront along major arteries like Queen Street, a trend that continues with big-box developments further from the downtown core.

The Dizzy Block name remains a casual one - there are no signs directing visitors to it or references on government maps - yet entrenched it is in public knowledge years later. It is so familiar that several years ago a local website was launched as a Charlottetown web portal by Simscape, a software company operated by Prof. Robert O'Rourke; the site didn’t last but operated for almost a year under the name that everyone could recognize as being at the heart of the action for Charlottetown, then and now, Dizzy Block.